Rep. Justin Amash (Mich.), the first Libertarian ever to hold a seat in congress, has gained both Democratic and Republican sponsorship for his bill to end qualified immunity, a policy which has shielded police from civil liability for excessive use of force. Its passage would enable families, such as that of the late George Floyd, to sue for damages. 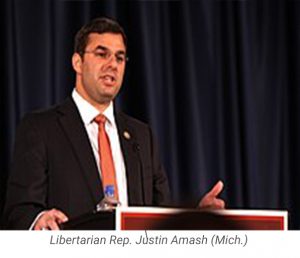 “Qualified immunity dangerously perverts the incentives of our public servants and leads to incidents like the killing of George Floyd, along with numerous other victims of police brutality,” she said.

With the co-sponsorship of “squad” member Democratic Rep. Ayanna Pressley (Mass.) and Republican Rep. Tom McClintock (Calif.), it may be the first tripartisan bill ever introduced in the House.

“An ordinary citizen can be sued for millions of dollars for causing a wrongful death,” said Jorgensen. “But not so, with a government employee. Letting them off the hook is just plain wrong.”

“No-knock raids go against everything America stands for, and have resulted in the death of scores of innocent Americans,” said Jorgensen. “We must abolish this despicable practice.”