GREENVILLE, SC. June 10, 2020 — “If Joe Biden aims to heal racial wounds in this country, he needs to immediately call for ending the racist policies he put in place, starting with the War on Drugs,” Libertarian Party presidential candidate Dr. Jo Jorgensen said today.

Jorgensen was responding to a statement the presumptive Democratic presidential candidate made in a speech on Tuesday, when he claimed, “I will seek to heal the racial wounds that have long plagued this country, not use them for political gain.”

But in 1989, President George H.W. Bush’s proposed escalation of the drug prohibition didn’t go far enough, according to then-senator Biden, who said that it “doesn’t include enough police officers to catch the violent thugs, not enough prosecutors to convict them, not enough judges to sentence them, and not enough prison cells to put them away for a long time.” 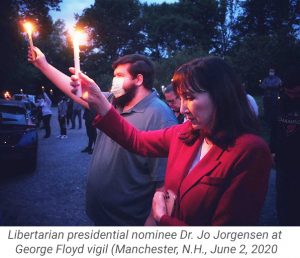 “Trump has made great fanfare of his pardoning a token handful of people convicted of drug offenses,” she said. “What about the other 80,000 nonviolent federal drug

offenders who remain locked up?”

“When it comes to racial injustice, it’s time for my opponents to stop their self-serving grandstanding,” she said. “Discriminatory drug-law enforcement is a big reason that people of color are five times more likely to be imprisoned than whites.”

“On Day One in the White House, I will pardon all victimless federal drug-law prisoners and encourage state governors to join me in establishing a long-overdue Drug Peace,” pledged Dr. Jorgensen. “But why wait? Justice demands that both of my opponents call for an end to the racist War on Drugs right now.”